is dick cheney running for president? 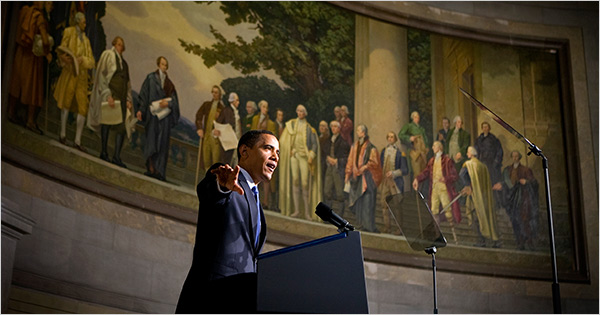 who knew there was a debate today?

in the national archives building, standing in front of the the constitution of the united states of america, president barack obama today gave an impassioned speech about national security, terrorism, the prison at guantanamo bay, and more. and in doing so, enlisted both the words of john mccain and lindsey graham.

then, in a backroom somewhere at a holiday inn and in front of a crowd of tens, dick cheney appeared, well...as dick cheney: hunched, nasal, bitter, selling fear and waterboarding. whatever you think of this man's views, cheney looks increasingly desperate. like an bloated kitty thrown into the deep end of the pool, forced to feverishly tread water.

andrew sullivan interrupted his vacation to post some early thoughts on obama's speech.
posted at 12:54 PM