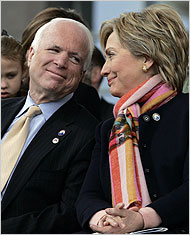 an interesting moment on "the chris matthews show" this morning. matthews went around the room with this question: who does (john) mccain want to run against (for president)?

the answers from the guests were varied. chrystia freeland, managing editor of the financial times answered simply "hillary clinton".

"provacative" david gregory, nbc's chief white house correspondent, said he thinks mccain would rather "run a generational campaign where he can make an experience arguement sharper against obama and a left/right argument stronger against obama than (clinton)."

the new york times' elisabeth bumiller added "he wanted to run against hillary clinton but right now his camp is divided. they always thought that hillary clinton would be easier to beat than obama but there's some people there who think obama's gonna be a...they think they can make a really good case against him on national security...he's weak on these things...you know, "the messiah", that whole argument. that's what they're doing right now anyway, that's their best shot." and then matthews and the panel turned to the new york times' david broder, who calmly stated "(mccain would) rather run against (clinton) because he respects her."

bumiller turned to matthews and said "he's telling you the truth."

matthews quickly tried to pull it together. "he'd rather run against her because he respects her and would rather have her beat him..." he said.

but it was too late. matthews showed his true colors in that split second. he couldn't, in the moment, believe for a second that john mccain might actually respect hillary clinton.

UPDATE 2/18/08 -- CORRECTION: it was another david -- of the brooks persuasion -- who was the guest on matthews' show this morning. david brooks; who is actually quite different from david broder. thanks to jimmy james for the clarification.